Released by Vintages on December 10, 2016 . My notes: An 80% tempranillo 10% graciano blend rated 90 by Thomas Matthews  September 30, 2015. The colour is a dense charcoal ruby with a light aroma of earthy cedar for minimal appeal. A swirl leaves a thin film although when tilted a dozen tears scatter from the rim. Quaffing intensifies a dull black cherry fruit, extra dry with a bright attack lasting longer than its character warrants. Have with red and yellow pepper strips seared with dark soya and moderating double baked potatoes. Once cellared and quickly forgotten, until pulled from hiding by a merciless marketer.  79

A General listing reduced from $18.25* until April 23, 2017. My notes: The film swells as it settles dropping small tears. A warm tart nose encourages continued sipping, soft on the lips, medium-bodied and bright on the palate The fullness of the grape and heat from fermentation makes this an enjoyable social offering. Serve freely as a solo starter or as a companion to bacon wrapped scallops or similarly prepared cremini stuffed mushrooms – or pair with grilled sirloin tips/seared tenderloin and double baked potato smothered in dark gravy. My preference is to quaff experiencing the warmth of soft fruit: blackberries, blueberries edged with red cherries. Cellar several years sampling yearly.  93

A General listing reduced from $13.00 to $11.00* until May 21, 2017: My notes: The colour is a light grapefruit and spreads a thin film wrinkling at the crest before sliding down chasing a few tears. The aroma has a green pea accent unwilling to release too much varietal pleasure. A mild acid doesn't quite balance a noticeable sweetness adding a floral twist to lemon and lime. Interesting for its ability to parch the mouth while adding a glycerol touch to the lips. Serve with hard cheeses, Italian sliced meats and pepperoni pizza - keep chilled. A social sipper and, if quaffed, a refreshing constructed Pinot Grigio.  84

Released by Vintages on November 2, 2016 reduced to $16.00.  My notes:  The nose is a refreshingly bright with a natural lemon grapefruit aroma. The first sip shows a fullness not expected as its glycerol touch adds an interesting fullness. A moderate film fragments at the rim and quickly recedes. The finish is long with a citrus sharpness wakenng the buds. Have with seafood grilled in butter on mounded rice, guinea hens baked with cranberries or sliced chicken breast.  Serve at 9oC and let its distinct heritage show on its way to 14oC.  91 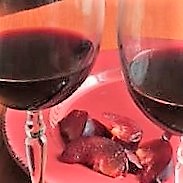 A General listing.  My notes:   A deep plum shade to side with our pork and plum sauce supper. First the aerated then the non-aerated. No doubt my preference is natural out of the bottle, slightly fruitier and brighter in flavour and nose. Both lay a firm film dropping long fast legs then to coat mouth and tongue with smooth blackberries. Quaff to confirm reality. The year is 2016 but can outlast the decade with care. Pair with anything beefy whether a Beef Wellington, prime or a rib rack nicely rubbed and singed by licking flames. 92

A General listing with price reduced from $16.15 until May 21, 2017. My notes:  A pale yellow poured while chilled and leaving a fine condensation on the glass. The film is delicate quickly leaving a heavily fragmented rim. A

slight pineapple, slight grapefruit,  a nip of gooseberry fruit and lemon starts an enjoyable journey down the aroma path. A prominent tang stirs the buds to a long, smooth, refreshing sip as long tears are shed. The palate is cleansed then left to dry until the next sip/quaff. Wash away with a share of broiled chicken, pineapple pizza or cod on rice a la vodka. Buy and cellar or drink now – a value imho.  92

A Vintages release on April 3, 2017. My notes: A product of the Boekenhoutskloof Winery.  Aerated for comparison there’s no change from non-aerated although the latter is my preference – a mystery? Both have a slight warmth and a garlic-cucumber nose airing quickly to soften first impressions. Has a solid ruby colour, clean and dense. Full-bodied, smooth, dry, steely edged finishing with a tart vanilla blackberry flavour draining through long slow tears. A stoic character for those that tolerate stoic. Pair with T-Bone, sirloin, chili con carne, or even salty game. Should cellar well. 91

A Vintages release on December 10, 2016. My notes:  A Blend of Tempranillo and Cabernet Sauvignon: Tempranillo for its brightness and the strength, often boldness, of Cabernet Sauvignon for red flexibility then a Spanish process. A crescent arch runs rapid tears not from lightness but from volume. Aerating softens the approach bringing an earthy black cherry forward – more earth than fruit. Chalk takes the day over a long finish. Pair with a variety of ‘The Keg’ coated beef. Or sip standing at a buffet of prosciutto wrapped blue cheese, grilled Polish sausage (mild) and pepperoni slices. Already seven years cellared another few may be optimistic - peaked at winning a Gold at Concours Mondial de Bruxelles in 2013.  85

Released by Vintages on January 7, 2017. Price reduced from $15.95. My notes: A pale grapefruit colour with a faint hint of spritz on loosening the cap. A thin film shows wrinkling at the rim. Dry as chalk from the first sip and leaving a sparse lemon/lime nose by itself. Interesting for a sauvignon blanc and to be paired rather than sipped solo. We served with grilled penne sized chicken slices and penne in a Monterey Jack sauce. Should do well with seared scallops/shrimp and white fish. Extra dry on the tongue, light and long. The empty weighs in at 1.4 lbs. 85

Released by Vintages on March 18, 2017. My notes:  The nose is mineral in character, more vegetative than fruit or flower, with a soft acidity. The film shows a delicate viscosity setting up an arched veil krinkling at the edge. The taste has a refreshing bite and a lasting finish with a glycerol residual. If sipping, a cheese tray or mixed fruit pieces could balance nicely. A tasting session of  Sauvignon Blancs from various countries would illustrate interesting terroir differences. Or pair with seafood entrées, shell or fin. One could describe this as a ‘refreshing’. 88

Released by Vintages on April 15, 2017. A blend of Alvarinho and Trajadura grapes. My notes: Crystal clear mid yellow with a delicate floral fragrance hardly noticeable unless sniffing with full attention to the aroma on pouring - a highly integrated texture and tangy chalk. A thin film glides over the glass and palate leaving streaks of warmth and lemon grapefruit. The nose has quickly adopted a muted mineral flavour, long and needing space to express itself. Tiny sips will show its full character - now’s the time to pair with seafood – mussels in a white wine and garlic sauce. Also, I imagine, squid or fresh oysters. Keep chilled throughout. 89

A General listing.  My notes:  There’s a glimmer of peach in a crystal clear pale yellow when held to the light. The nose has a likeness to Bosc pear with some appeal although a noticeable sweetness contradicts the fruit as it starts a long, almost cloying, finish. Swirling leaves a thin film quickly receding while showing  random cracks at the rim. Now shifts to short with waning flavours the start of a muted mineral taste. Keep chilled to sip or to pair with fresh berries in a custard -  citrus or vanilla. Not an entrée companion – perhaps with pineapple chunks and sliced ham pizza. 78

A General listing:  My notes: Four labels from Beringer are in this blog entry: Cabernet Sauvignon, Pinot Grigio (2) and Sauvignon Blanc. This has a sweet edge – a characteristic of Pinot Grigio, but in this case tangy and extra dry, fresh to the point of being rude. A thin film flows bitter wreaths on the glass before meeting the meniscus. A delicate nose complements the sweet grapefruit and pear flavour but it comes with a penetrating acid and long finish. Plan a few bottles for a summer patio party – include a dozen NZ savvies to see which go first. 90 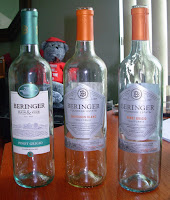 A General listing. My notes: A medium golden that lays a moderate film running well developed tears while leaving interruptions along the rim. You can feel a sweet zest from the first sip, not of fermentation but of acid remnants. An indistinct fragrance leaves the sipper to his own imagination, from young skins and a distant cousin of gooseberry. There’s enough brightness to complement a spicy or savoury entrée - enough strength to balance pineapple pizza and chicken slices covered with a piquant sauce. Perhaps sufficient strength for an anchovy extra. Chill until served then provide a chilled carafe. A pleasing drink now. 87

A General listing. My notes: A slight bronze to a mid yellow clear and bright. A swirl lays a firm film that quickly sheds a ring of tears. A modest nose, tangy to the nostrils and bringing a brisk sensation of citrus as the main thread. Long, warm and sweet, medium-bodied. Have with mussels. Have with bacon wrapped scallops – and other grilled/seared shrimp. Or be venturous with mushrooms in a garlic sauce, sliced chicken breast stuffed with Monterey Jack cheese and a side of double baked potatoes. Extra body adds flexibility over the previous Beringer PG. 91