These are wines picked up on the way home or while shopping, found in the cellar or brought to the house by generous guests. As before, when tasted the wine will appear in bold.
Cheers, Ww

A General listing described as “Deep ruby; spicy herbal nose with cherry, vanilla and cassis; Dry, medium bodied with soft tannins. Serve with pasta primavera; Picnic fare.” My notes: Grapes or juices may come from anywhere for this non VQA blend. The colour is a mid ruby and leaves a film and slow tears on the bowl. The nose has elements of blackberry and a nondescript spice. The first sip is on the sharp side of bright refreshing and leaving the palate warm with a cherry-berry edge and drying tannins. I didn’t get pepper as the spice and the fruit wasn’t developed but young with a raw edge. A thinnish medium-bodied and for the price an OK bar drink or companion for burgers or a BLT on toast - ‘picnic fare‘. A drink now. 76
.
ROSEMOUNT DIAMOND MERLOT 2006, Australia, 13.5% D, #542431 $17.00 (Tasted December 1, 2008) CS
.

A General listing described as “Medium to deep ruby red colour; plum, sweet oak, black cherry and cocoa aromas with plum and berry fruit flavours; dry and medium to full-bodied with medium tannins; long finish. Serve with roasted or grilled red meats; lamb; strong cheeses.” My notes: Several of the Rosemount beverages have been tasted since this blog started in 2005 with the last, a 2006 shiraz/cabernet blend, in July 2007. Whites have tended to be more drinkable imho than reds. This 2006 Merlot is a deep ruby colour with a garnet hue and has aromas of sweet berry compote and leaves a thin viscous film on the glass. Medium-bodied, a modest taste of bramble and berries with a long finish starting with bright berry and ending with a dry mineral layering on the palate. Not a sipper although hors d’oeuvres would cover most of an unappealing finish. Did not complement a meat and cheese lasagna very well. A commercial drink now. 76
.
FINCA FLICHMAN MISTERIO MALBEC 2007, Argentina, 13.5% D, #028803 $9.90 (Retasted December 3, 2008)  CS
.

A General listing described as "Dark ruby in colour, the nose shows aromas of dark berry, toasted vanilla and oak spices. It is medium-bodied, fruity and toasty. Serve with grilled steak, smoked sausages." My notes: I rated this 86 in April this year calling it a ‘merlot with attitude‘. This is the same vintage but now reads 13.5% alcohol on the label, significant only in the sense could this be a new production of the same vintage or just a new label? Still has a deep ruby with a purple tinge and fast uniform legs after a swirl. The aromas include slightly jammy berries with a natural sweetness and an oaky edge. Well balanced fruit with acid and tannins gives a silky dry texture, medium-bodied, and a long finish of brambly berries and liquorice, an adequate sipper and good value for a social or family gathering especially with beef flavoured finger foods. Have with rack of lamb, T-bone or hamburgers and fries. A drink now. 86
.
ORTAS RASTEAU TRADITION CÔTES DU RHÔNE VILLAGE 2007, Rhone, France, 14.5% D, #998716 $16.95 (Tasted December 5, 2008)  CS
.

A Vintages release on December 6, 2008 described as “This is juicy, showing lots of raspberry and currant fruit, with sweet spice and a nice graphite-filled finish. Drink now through 2009.(88/100, James Molesworth, Oct. 15, 2008).” My notes: The 2006 vintage was tasted last June with a rating of 90 calling it a ‘polite red’ meaning it had delicate aromas, subtle flavours - a definite value. Now a dollar higher, the colour of the 2007 is a rich violet ruby, elegantly striking in a wide bowl. The aromas are a delicate ripe plum, berry and warm leather providing an enticing intro to flavours of ripe cherries, black currant, berries with nicely balanced acids and tannins. Finishes long, silky and bright with a liquorice ending. An excellent value, this vintage. Pair with prime rib, grilled chipolte sirloin, marinated ribs or rack of lamb. This could cellar for a few years and develop even more interest. 92
.
CHÂTEAU PEY LA TOUR BORDEAUX 2006, Gironde, France, 13.0% D, #264986 $14.95 (Tasted December 9, 2008)  CS
.

A General listing described as “Deep ruby colour; cedar, earth, red liquorice, cassis, fresh cherry aromas with mushroom notes; dry, medium- to light bodied with cherry-tinged and plum fruit flavours. Serve with grilled steak; cheeses; rack of lamb.” My notes: This has a yellow label versus the white label of Château Pey La Tour Réserve du Château, #925859 at $22.95. The Bordeaux has a vivid, deep ruby colour with light mushroom and slight cherry aroma. A red cherry flavouring, a seam of drying tannins and bright acid though not tart then finishing chalky dry with a slight graphite edge. An OK sipper although medium-bodied it comes across somewhat thin on the palate and just a touch of flavour. Have with prime rib, osso bucco, grilled sausage or chicken breast. Drink now, not enough there to cellar. 83
.
J.P. CHENET CLASSIC CABERNET SYRAH 2007, Languedoc, France, 13.0% D, #090472 $9.95 (Tasted December 10, 2008)  CS
.
A General listing produced by Les Grands Chais De France. My notes: A mid ruby colour and leaves a thin film on the bowl. A delicate floral aroma not distinctly fruity unless a cherry note. Silky and medium-bodied, soft tannins and a bright acid - seems more like a Grenache blend than syrah - a cherry flavouring and a moderate finish that is smooth, lightly flavoured and a touch of spice. A welcomed social sipper ready for mild cheese nibbles or melted mozzarella on toasts. Have with prime rib or grilled liver and onions, mildly spiced turkey wings or bacon on a bun- was good with cheese and spinach cannelloni in a tomato sauce.. A drink now and a value house red for a crowd. 82
. 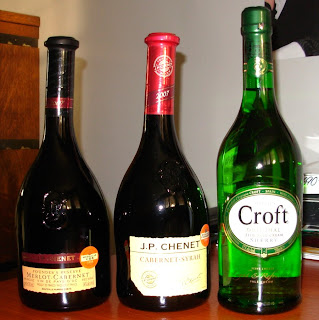 J.P. CHENET FOUNDERS RESERVE MERLOT CABERNET 2007, Languedoc, France, 14.0% D, #621995 $11.95 (Tasted December 11, 2008)  CS
.
A General listing produced by Les Grands Chais De France and described as “Medium dark red ruby colour; aromas of black berry and spice; dry, medium bodied, with rich fruit centre and good structure. Serve with burgers and grilled meats.” My notes: A deep crimson colour and mostly soft aromas of blueberry but with a touch of ‘forest floor’, somewhat earthy. A firm film with slow tears forms on the glass. The first sip is velvet smooth, full-bodied with flavours of blackberries muted by blueberries. The finish is long and bright balancing fine tannins and acid. Quite delectable as a sipper with enough body and fruit to be enjoyed with or without hors d’oeuvres. Have with prime rib, rack of lamb or a meaty stew - was OK with cheese and spinach cannelloni in a tomato sauce. Priced for an economical dinner or have for a friends and family get together. This should cellar well up to two years, perhaps longer. 89
.

J.P. CHENET MINERVOIS SHIRAZ GRENACHE 2005, Languedoc, France, 13.0% D, #028597 $7.95 (Retasted December 13, 2008)  CS
.
A General listing and produced by Les Grands Chais De France. My notes: Last tasted in December 2007 with a rating of 82. *The current vintage is $7.95 but not available locally. The 2005 vintage was $12.95 when purchased. The bottles used for Chenet wines so far do not fit standard wine racks… but add elegance to the table. This is a deep ruby with a violet twist and aromas of distant cherries, almost undetectable though. A light flavour of cherries and a mineral aspect, the Grenache, that carries to the finish which is silky and bright with fine tannins and mild spice added to the mineral edge. An interesting medium-bodied social sipper by itself or with grilled tidbits. Have with anything meaty: prime rib, steak tartare, sausages, liver and onions or shrimp and chorizo in a marinara sauce. This lasted a year in the cellar and could go another two years. Repricing may be a tiering thing with ‘Minervois’ becoming an entry level blend. 86
.
CROFT ORIGINAL FINE PALE CREAM SHERRY, Jerez, Spain, 17.5% MS, #073452 $15.25 (Tasted December 18, 2008) CS
.
A Vintages release on February 16, 2008 and described as “This smooth and luxurious cream sherry is actually a sweetened fino. It should be served chilled in a wine glass. It makes for a memorable alternative to traditional dessert wines and matches beautifully with lemon tart, light holiday puddings and fresh fruit salads.” My notes: Produced by Gonzalez Byass & Co. This has the aroma of fino, shellac-like, but not to the extent it’s predominant. The flavour has a tinge of shellac but a slight sweetness balances it, a raisin accent and slight spice nicely. A different sherry for the cabinet except it should be served chilled. Have as a sipper with guests, with a tangy dessert or well after a meal. Not for cellaring - a special and not rated.
.
PHILIPPE DE ROTHSCHILD SAUVIGNON BLANC 2007, Languedoc, France, 12.5% XD, #407536 $10.95 (Tasted December 14, 2008)   CS
. 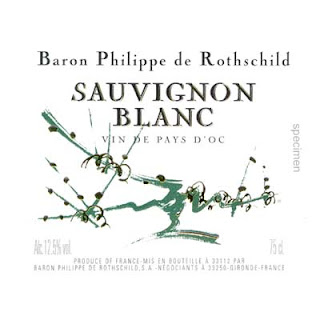 Released by Vintages on August 18th last year following the 2003 vintage released a year earlier. Described as a “fabulous ripasso with enough structure to match flavourful dishes” and “fruit-forward style as a sipping wine”. My notes: A popular red as all local outlets are out of the current vintage released in October this year - and discounted to $14.95* for the Season. This is a deep ruby with a garnet cast and has subdued aromas of fresh cherries and vanilla, then dry and bright fruit ending in a dry wood and raisin finish. A delectable medium-bodied sipper having a silky touch along with ripe fruit and spice that’s appealing. Would be great with prime rib or a T-bone steak, ribs, meaty pastas or lasagne. Cellaring for a year has been good for this red and could go another few years. 90
.
MONTES CHERUB ROSÉ OF SYRAH 2007, Colchagua Valley, Chile, 13.5% D, #037887 $16.80 (Retasted December 17, 2008)  CS
.

A Vintages release on February 2, 2008 for Valentine`s. It was described to have “… a pretty strawberry-, rhubarb-, pomegranate-, sour cherry-scented nose. Dry and crisp with excellent fruit freshness and a lively, tangy/fruit finish… “. My notes: Last tasted in May 2008 I felt it was more suitable as a sipper or with a not too sweet dessert or “with Alaska King Crab - but keep a creamy chardonnay handy…” This has a nicely rounded mouthfeel with a light acid and tinge of natural sweetness. The colour is a bright cherry red, resplendent in a tulip glass and a fragrance softer than last tasted almost ‘not there’… but the fresh berries are there with a light spice in the flavour. Served cold it’s a great sipper or quaffed with slightly sweet cookies or fruit tray - would be a good cooler on a hot summer afternoon. Doesn't have the body as a meal rosé but it's a clean, crisp fine wine. 84
at 4:00 pm No comments: